Вы здесь: Главная > The Power of a Snowflake 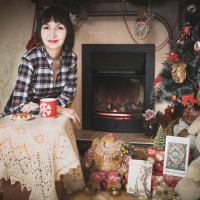 One frosty winter day lots of tiny snowflakes were falling from the sky. Their way was very long – each of them had to fly from the sky to the ground.

Swirling in the air the snowflakes were thinking of their fate.

“I wonder what I was made for?” one of them thought.

“What should I expect on the ground?” the second one wondered.

Some of snowflakes felt bored thinking about such difficult questions alone. So they started to discuss their thoughts with the other flying snowflakes.

“What do you think,” a fluffy snowflake asked a small one, “Do we have any influence in this world or it’s our destiny just to fall on the ground and nobody even will notice our appearance?”

“Certainly, we are very small,” a slender snowflake answered, “But if all of us were sent to the Earth there should be some sense in it.”

“We can change nothing!” a snowflake with a broken tail exclaimed. “People will not even pay us their attention until there are so many of us that they’ll have to take us off the roads so they can drive their huge cars.”

That snowflake had already been on the Earth as a rain drop and she considered herself very wise and all-knowing.

“So what is the sense of our life?” a slim snowflake-philosopher asked.

“There is no sense at all,” answered an experienced snowflake with great annoyance. “Little silly, I’ve already told you that we are sent to people so they have to clean and sweep their cars and roads!”

“But I don’t believe it! There should be something special in our existence! Look, we are so beautiful!” the fluffy snowflake thought but she didn’t make up her mind to say those words because she was afraid of angering her friend.

“Don’t believe that!” a beautiful snowflake said to her as if she had read her thoughts. “I have already been a snowflake before and I’ve seen how glad children were when they watched us flying down. They were sledding, skiing and also they were making snowballs and throwing them at each other. I didn’t understand why they were doing that but it was a lot of fun and they were laughing loudly.”

“Wow, I guess that was very interesting!” the fluffy snowflake added.

“Soon you’ll see it with your own eyes! Just believe in the best!” the beautiful snowflake assured. “In addition I saw the people making huge balls from snow and putting them on top of each other so that they made a creature that looked like a man! And children hang paper snowflakes on the windows in order to show how much they admire and wait for us.”

Snowflakes were whirling in the air and approaching the earth quickly. Some of them were looking forward to meeting something mysterious and miraculous. Others were preparing to become mud on the roads.  Snowflakes didn’t know that the wind which brought them on his wings was listening to them very attentively. He cherishingly directed each snowflake to the place she wanted to be.

The fluffy snowflake fell on the hair of a young beautiful girl. The girl and her friend were standing next to a big city Christmas tree. The lights were burning on the Christmas tree and illuminating the snowflake with different colors. That made her even more beautiful.

“What a wonderful snowflake is on your hair!” the boy said to the girl, “That’s because you are very beautiful!” he added and kissed the girl for the first time.

The snowflake didn’t know what love was and why people touched each other with their lips. She just felt good. She guessed that she has done something special. Because of their hot breath she melted and turned into a shining and happy water drop.

The snowflake-philosopher fell on the window of a house. At that moment there was a baby boy sitting beside the window with a big scarf around his neck. He was sick and his mother didn’t let him ski with the other children.  He was looking at the children on the slide and felt sad hearing their cheerful voices.

“Mummy, mummy, look! What a wonderful snowflake! Has it flown for me?” asked the boy.

“Sure, darling!” answered his mother. “You may ask her anything you wish and she will make it true. Think quickly and go to the bathroom. It’s bed time already.”

“I want to be healthy tomorrow,” whispered the baby boy, bending towards the snowflake.

The snowflake didn’t know what she had to do, but she felt that everything would be as he asked.

Each snowflake found her purpose on the Earth. Some of them became snowmen, some covered trees and bushes to keep them until the spring. And the rest of them turned into the mud on the roads.

The wind exactly fulfilled each of the snowflakes wishes. He has never made any mistakes.